It is not often we meet someone who really lives their passion, so you can imagine my       delight to meet a person who's devoted to two! This Friday, author and animal activist Chris Hammer discusses her new novel, Family Can Be Murder. It is a suspenseful,  fast-paced thriller that will have you laughing one minute and scratching your head the next.

Jane Grotto, the star of the story, isn't looking for any trouble. She is content to run her car repo business, have Sunday dinners at her parents' house and hang out with Fred, her feisty but good-natured Chihuahua. But when Jane's favorite cousin is accused of murder, trouble finds her. As she races to prove his innocence, she stumbles into a closet full of family skeletons, one of which is definitely worth killing for. Jane isn't looking for romance either, but when sexy NYPD detective Lou Lotedo shows up on the scene...well, let's just say there's only so much temptation a good Catholic girl can resist. Like any book you can't put down, Family Can Be Murder is over far too soon. Luckily for us, it is only the first installment of the Dysorganized Crime Series. The second book will be released some time this fall.

Family Can Be Murder is her first novel, but it is not her first book. Her debut short story, Bixby and the Wolf, won international acclaim and was ultimately developed into a short story collection, Bixby’s Canine Capers. 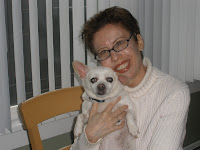 Chris is also the Founding Director of Irving House Animal Sanctuary; a rescue organization she established four years ago for the care of abandoned senior and special needs animals.  The organization is named for her first "client", a blind pit bull named Irving.  Since she was a child, Chris wanted to do two things: write, and help animals, and she is living both dreams. A portion of the proceeds from all book sales will fund Irving House.

To read more about Chris' incredible work with animals or to order her books, please visit http://www.irvinghouse.org/
And be sure to tune in to the WITS podcast on Friday!